For a number of years now, industry observers have been virtually unanimous in their view that the traditional bank branch channel is facing strategic challenges. Decreasing traffic and increasing costs have been driving branch productivity steadily downward.

As technological advances and changing customer preferences reshape their channel mix, banks must reassess both their branching strategies and their branch operating models. A good place to begin is by comparing branch performance to industry benchmarks.

The annual Crowe/Independent Community Bankers of America (ICBA) Branch Benchmarking Survey offers valuable information in this area. The 2016 survey included detailed performance information covering 305 branches operated by 19 banking organizations and representing a cross section of the industry by size and demographics. The survey was conducted in the fall of 2016 and gathered 12-month branch performance numbers for each branch.

The survey results provide metrics and benchmarks for branch productivity and account portfolios, as well as information on staffing levels and the uses of new technology within the branches. In addition to highlighting the continuing challenges banks face in branch operations, these results also can provide insight into some potentially viable solutions.

Exhibit 1 compares the 2016 survey responses with those from the same questions in the 2006 survey. During that 10-year period, the average number of total full-time equivalent (FTE) staff members per branch declined by 45.5 percent, although the number of FTE staff members in teller positions declined by only 16.7 percent. 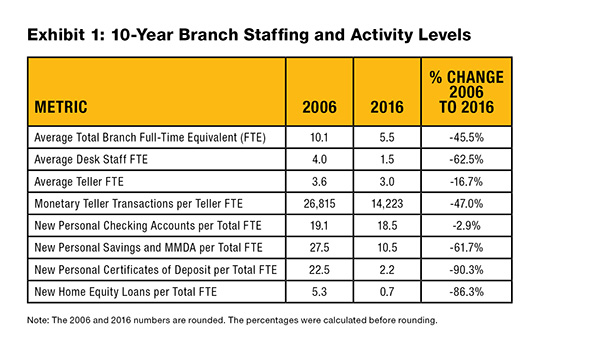 Moreover, branch sales productivity numbers have dropped even more dramatically during the past 10 years. The number of new personal savings and money market deposit accounts (MMDAs) per total FTE is down significantly – a drop of 61.8 percent – due in part to customers’ increasing ability to open deposit accounts through other channels. The numbers for new CDs and new home equity loans per FTE are down even more dramatically – more than 90 percent for CDs – reflecting changes in the interest rate environment and the lessened interest in home equity products since the last recession.

Regardless of the causes, these comparisons suggest there will be continued challenges to the traditional branch model for some years to come.

The Crowe/ICBA survey data can be even more useful when demographic data is appended to individual branch responses. Adding demographic data reveals how branch performance can vary significantly according to geographic location and the population and demographics of the surrounding community. This analysis can be particularly important for community banks, in which performance and overall bank strategy are directly affected by local economic conditions.

For example, the survey responses suggest that branches in rural areas appear busier, with higher sales numbers and significantly more transactions per teller, as shown in Exhibit 2. Rural branches generated much higher numbers of new personal checking, savings, and MMDA accounts per branch, but branches in urban areas generated more new business checking, savings, and MMDA accounts per branch. These differences by population density may be due to legacy customer behaviors and the extent of competition. 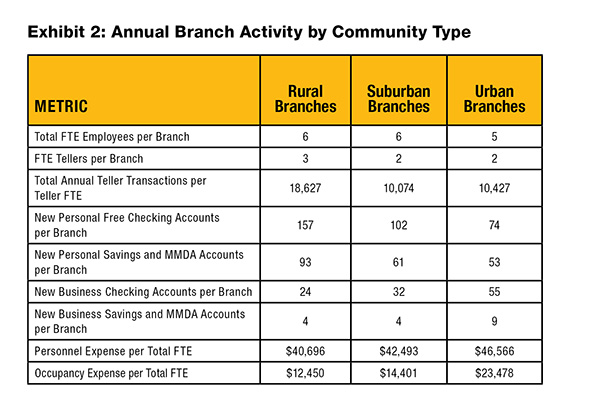 Not surprisingly, both personnel and facility occupancy costs per FTE were significantly higher in urban areas. Such variations must be factored in when making strategic decisions and adjustments to improve branch performance. Decisions regarding staff capabilities, local decision-making authority, operating hours, self-service technologies, and other management issues should reflect the various branches’ local market characteristics.

In addition to demographic differences, another leading differentiator of branch performance is the relative emphasis placed on business accounts, such as business checking, savings, and CD accounts.

For example, it probably comes as no surprise to learn that average checking account and CD balances have grown over the past 10 years, while average savings and money market account balances have declined. Such trends are likely a reflection of today’s lower interest rate environment. What is more instructive, however, is to compare the relative size of the changes between personal and business accounts, as shown in Exhibit 3. 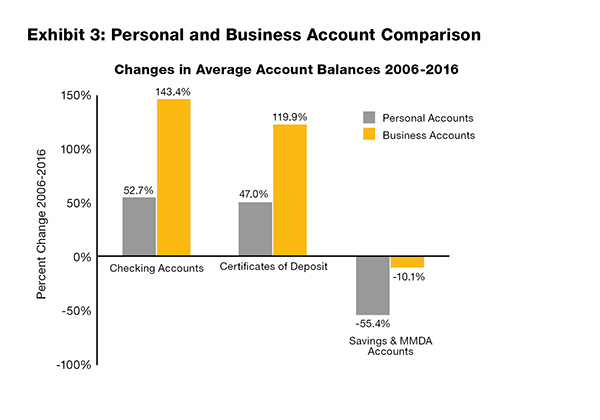 Bank managers can expect these differences to be reflected in branch performance, as higher average balances improve the relative productivity levels per FTE. As a result, many industry leaders are developing targeted approaches for growing the business segments of their account bases. Typically, this effort requires enhancing branch staff capabilities and knowledge, implementing business-friendly policies and hours, developing a proactive approach toward building business relationships, and offering a suite of products such as merchant services and treasury management services, which are designed specifically to meet business customers’ specialized needs.

Another widely noted industry trend in recent years has been the continuing growth in the use of so-called “universal bankers,” who have multifaceted job responsibilities ranging from cash handling and basic transactions to product and service sales and referrals to other lines of business. In addition to helping reduce employee headcount in the branch, the universal banker strategy also is intended to provide better support for all three essential functions performed in the branch:

As Exhibit 4 shows, the branches in this year’s survey that employed a universal banker strategy tended to be slightly smaller in terms of average overall branch value and employee population, but they produced a higher average value per FTE. (Value in this context was measured using a multifaceted metric that combines quantitative measures of branch performance in the areas of sales, service, and customer retention.) 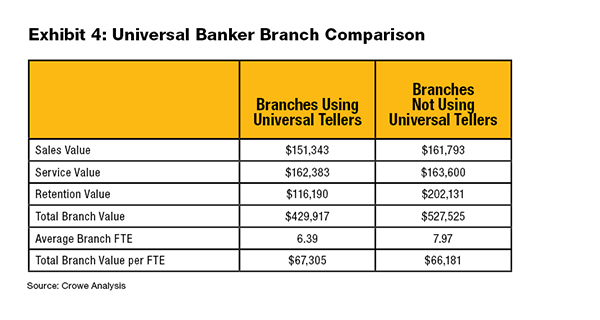 Regardless of whether they formally adopt a universal teller model, many banks today are opening up floor plans and eliminating traditional teller windows and lines. The goal is to remove physical barriers and encourage better interaction between customers and staff.

At the same time, some banks are moving in what might be seen as a somewhat different direction, using technology to reshape the customer interface. One example is the introduction of interactive ATMs, which handle routine transactions like conventional ATMs, but that also offer optional live on-screen support from staff members working remotely.

Regardless of the specific tools and techniques they employ, banks today must continue to take an increasingly proactive approach to branch productivity. This effort typically encompasses a variety of tactics, including:

As the 2016 Crowe/ICBA survey results clearly indicate, branch productivity is almost certain to remain a critical banking industry concern for some years to come. The strong declines recorded during the past 10 years show no signs of abating soon, which means banks will need to continue adapting both their branching strategies and their operational tactics.

By measuring their performance against industry data and benchmarking their improvement efforts against industry best practices, boards, executives, and bank management teams can actively work to adapt their organizations to today’s fast-changing customer expectations.