home Crowe Careers Blog Surrounded by diversity in Miami, Sophia Schneider is inspired to be a

Surrounded by diversity in Miami, Sophia Schneider is inspired to be an ally. 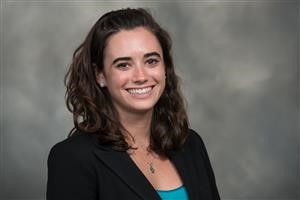 Sophia Schneider (Miami) may not be Latino, but living in the city of Miami inspired her to join Crowe’s Latino People Resource Network (LPRN) as an ally. “One of my favorite things about living in Miami and being a part of the Miami office is the diversity here,” Sophia explained. “It makes Miami such a vibrant and unique city. Joining the LPRN and being an ally allows me to be part of that.” Sophia joined the PRN last year after a conversation with LPRN member Jennifer Santana-Shalwani (Fort Lauderdale), who pointed out that anyone could join any PRN, regardless of his or her ethnicity, gender or orientation. Sophia realized that everyone can be involved in celebrating diversity at Crowe.

Sophia says that her involvement with the LPRN in the past year has allowed her to form new connections with members in other Crowe offices and led her to participate in events around Miami that she would not have been aware of if not for the LRPN. Sophia participates in LPRN virtual group meetings and the PRN Days of Service but intends to get even more involved in the group going forward. Sophia encourages anyone at Crowe to join PRNs. She added, “Many of the benefits of having a diverse workplace come from people of different backgrounds working together and sharing their different ideas and points of view. Joining a PRN as an ally gives you an added opportunity to do just that.” In addition to the LPRN, Crowe has an African American PRN, Asian PRN and LGBTQ PRN open to everyone in the firm. Click here for more about Crowe's Diversity and Inclusion efforts at Crowe.