See how Dallas team members are having some fun this busy season while still achieving their goals. 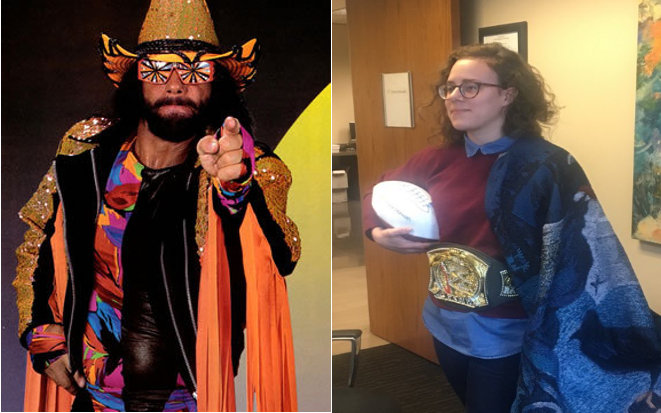 With the traditional audit and tax busy season underway, many people are spending longer hours and more time in the office. Inspired by the world of wrestling and Macho Man Randy Savage, our Dallas team members have found a way to relieve some of the stress and inject some fun into the season. The office is holding a weekly audit challenge and crowning a champion with a belt each week. Anyone can nominate a colleague or themselves for the belt. Sarah Merriman (Dallas) was named a champion and she wore the belt for “managing the team responsible for finishing all substantive testing on a large public job, for having great lunch ideas for the week and for fighting through adversity (parking issues) to deliver a solid weekly performance.”

The weekly audit challenge is just one of the many activities coordinated by the Dallas office fun committee, which is comprised of first- and second-year staff members responsible for finding ways to have some fun on Saturdays during busy season. “We try and provide a break in the routine for those working on the weekend and create a sense of excitement and curiosity,” explained Pete Robles (Dallas), the committee chair. “Each Saturday has a theme and a fun activity such as clay sculpting, create funniest joke contests, giant Jenga and corn hole. Of course work is our priority but giving people 15-30 minutes to enjoy themselves really boosts moral in the office.”