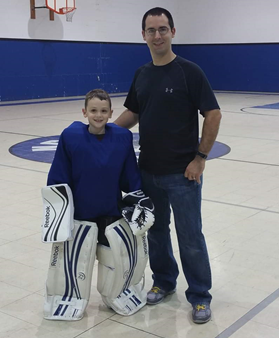 When he was 10, Micah Goedelman (St. Louis) began playing hockey and quickly fell in love with it. Due to registration and equipment costs, he only played on an organized team for a couple of years. As an adult, he wanted to share his love of hockey with his son, Merrick, and found an opportunity to do so for his son and other kids through Children’s Floor Hockey League at the Ferguson Church of the Nazarene. The league’s mission is make hockey more accessible to boys and girls ages 7-15, especially from lower-income families in St. Louis’ North County area. “We decided to try the league because it was closer to home and less expensive but, more importantly, we were drawn to the league’s mission,” explained Micah. Today, Micah coaches his son’s team.

He and all other league coaches, officials, scorekeepers and organizers are non-paid volunteers, which allows the league to put its dollars into purchasing pucks, sticks and goalie equipment for children who can’t afford them. “Seeing kids experience organized hockey at the same age I was when I played has renewed my love for the game and my passion to help others who are less fortunate,” Micah shared.