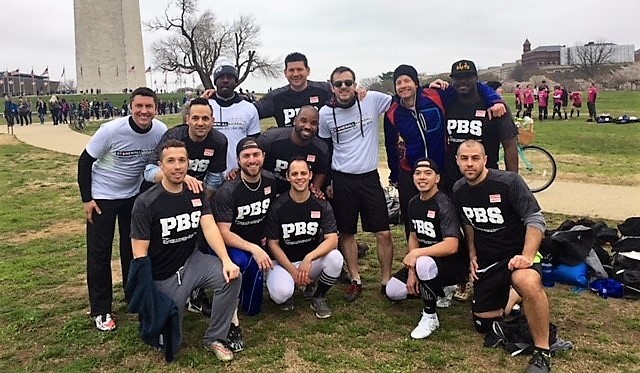 Since 2011, Cory Dykstra (Washington DC) has been volunteering with Stonewall Sports, an LGBTQ & Ally community-based, non-for-profit sports organization in Washington D.C. that raises funds for other local non-for-profits. Cory got involved when a group of friends began looking for opportunities to get together on a weekly basis to hang out and meet new people in the community. “We decided to start a kickball team and Stonewall Sports was the first to offer an adult LGBTQ league,” explained Cory. Each team in the league chooses a charity or not-for-profit to support and holds fundraising events such as car washes, bake sales and raffles to raise money. The winning kickball team each season gets an additional $1,000 for its charity and the team with the most documented volunteer hours gets an additional $1,000. So far, Cory’s team has raised approximately $12,000. “This spring will be my seventh year playing in the league and my 15th season overall,” said Cory. “Our team has supported many organizations including SMYAL, the Wanda Alston Foundation, the National Black Justice Coalition and the Trevor Project.” In addition to the kickball league, Cory also volunteers with Stonewall Sports in others ways such as being an umpire, running practices with other teams, holding kickball skills clinics and participating in neighborhood clean-up events. “When I was new to D.C., Stonewall Sports was a great opportunity for me to meet others in the community and create lasting friendships. I even met my fiancé because of Stonewall Sports,” said Cory. “With a focus on giving back, we want to show we care about not only the LGBTQ community, but also for the D.C. community.”

To learn more about the volunteer efforts at Crowe, visit the Crowe Foundation page.