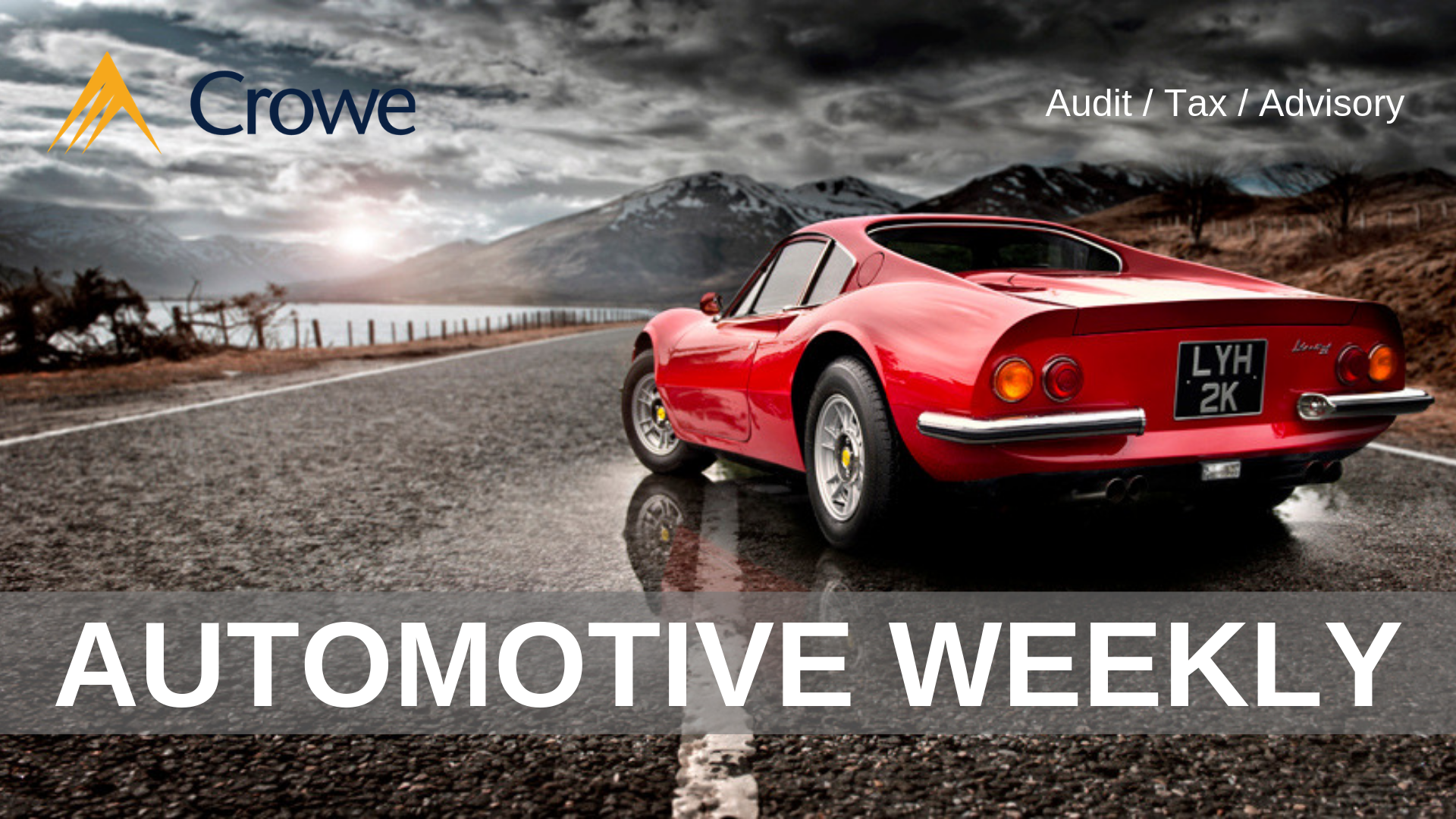 Results from the world’s largest car maker are no guide to events in the global auto industry, but they do highlight how investors should approach it. Crisis, if properly exploited, will be where opportunity lies in a deteriorating industry environment. Against a backdrop of falling auto sales and rising technology costs, Volkswagen AG —the top-selling vehicle manufacturer globally in recent years—reported remarkably stable results Thursday. Revenue in the first half was almost 5% higher than in the same period of 2018, because of strong pricing and a rising share of sport-utility vehicle sales. Unlike its German peers Daimler AG and BMW AG, VW hasn’t issued any profit warnings this year. The company’s relative strength stems in part from its well-established brands, from VW itself to Audi and Porsche, and dominant positions in the key markets of China and Europe.

Ford Motor Co., General Motors and other carmakers are pouring billions of dollars into developing autonomous technology as companies come to the realization that launching the self-driving vehicles will be much more difficult than previously envisioned.

So far, Google’s Waymo is the only company offering a self-driving, ride-sharing fleet in the Phoenix suburbs. The growing focus by Silicon Valley tech giants on autonomous technology is increasingly worrisome to Ford, GM and others, according to former executives and industry insiders. The fear is that the offering will be too difficult to develop and the firms will be forced to license software from Google or Apple, effectively giving those companies ownership of the customer interface and, subsequently, all the data that is collected. While companies may make some profits off of providing mobility services like ride-sharing, the major revenue stream for self-driving cars will be in the user information they gather. The key question is how to monetize that data and it has industry leaders stumped, according to Bharat Balasubramanian, a former executive at Daimler AG and current professor at the University of Alabama. “This is the biggest challenge for all automotive manufacturers,” he told FOX Business. “The Google model is much more powerful. They can build up a fantastic predictive model of your habits and of everyone around you and that model would be worth billions.”

Ford disclosed on Wednesday that it spent $264 million in the second quarter on its autonomous effort and other mobility initiatives, a 46 percent increase from the year prior. The Dearborn, Michigan-based carmaker previously announced an expanded partnership with Volkswagen on developing the technology with partner Argo AI. And the most important part of that deal is the data, according to Ford President Jim Farley. The two companies plan to market their respective vehicles separately, so no customer information will be shared.  Executives at the firms acknowledged the long road ahead in bringing self-driving cars to consumers, but Ford is already plotting how to monetize the time in which customers are in the vehicles.

Among other initiatives, the company is in discussions to provide licensed content to riders catered to how long the drive is, something akin to a Netflix show that may last only seven minutes or basketball games that are condensed to 30 minutes.

Ford’s Farley estimates that as much as 95 percent of the revenue from the vehicles will come from the time spent inside the car. And for the past three months, he’s been working with external partners on those offerings. “We’re going to build a whole new group of services that people don’t see today. We need, as an industry, to start educating our stakeholders about what those businesses are going to look like,” he told FOX Business “The tech is great, but once we get past the tech, what matters is the businesses and those experiences for the customers.”

As Ford eyes future revenue streams, General Motors is pumping the brakes on its own self-driving program. The Detroit-based firm announced on Wednesday that it would not meet a self-imposed deadline to roll out a large number of self-driving vehicles by the end of the year, to give GM and its partner Cruise more time to conduct testing. “In order to reach the level of performance and safety validation required to deploy a fully driverless service in San Francisco, we will be significantly increasing our testing and validation miles over the balance of this year, which has the effect of carrying the timing of fully driverless deployment beyond the end of the year,” Dan Ammann, Cruise’s top executive, wrote in a post.

Waymo and Cruise did not respond to interview requests for this article.

Despite the struggles facing the industry, the self-driving programs are still drawing ample investment. Cruise, for example, has raised more than $7 billion from GM, Honda, and others. The company expects to spend over $1 billion this year on developing and testing autonomous technology.

Porsche’s iconic 911 sports car, which shaped the German brand’s luxurious appeal for decades, may soon be eclipsed by the battery-powered Taycan in terms of deliveries.

Just over a month before its official unveiling in September, Porsche has already amassed deposits for nearly 30,000 Taycans, and the early haul supports plans to lift annual production of the brand’s first all-electric model to 40,000 vehicles, Evercore ISI analyst Arndt Ellinghorst said Monday in a note.

With Porsche delivering 35,600 911s last year, the Taycan -- to be priced at roughly $90,000 -- could zoom past the combustion-era hero to define the brand for the next generation.

Success of the Taycan is critical for parent company Volkswagen AG to boost the appeal of electric cars as it prepares for a rollout of battery-powered vehicles across all price ranges. The Taycan’s arrival could also pose a fresh challenge to Tesla Inc.’s Model S, a key vehicle for Elon Musk’s effort to make the electric-car leader profitable.

Tesla hasn’t detailed plans to overhaul its successful Model S luxury sedan that’s been on sale since 2012, betting on the Model 3 to target mass-market buyers instead. While sales have risen, the car’s lower returns have seen Tesla’s losses accelerate to cast fresh doubt on whether building and selling electric cars can be a sustainably profitable business. Tesla’s bid to expand outside the U.S. “is essentially a down-market push that will exacerbate eroding gross margin,” Bloomberg Intelligence analyst Kevin Tynan said in a note. The California-based firm is at risk of trading in a strong domestic position “to scrap with local rivals in foreign markets.”

Porsche has taken a page from Tesla’s playbook. Customers can register as a prospective Taycan buyer by placing a 2,500-euro deposit, which gets deducted from the final purchase price. To help drive uptake, Porsche is installing fast chargers at dealerships in the U.S. and Europe that will load the Taycan’s battery with enough power to drive as far as 100 kilometers (62 miles) in four minutes. The car’s total range on a single charge stands at 500 kilometers.

Porsche set an initial production target of 20,000 vehicles per year, based on a two-shift system, but that can be expanded if needed, production chief Albrecht Reimold told reporters last year.

The company has been rapidly building up capacity in recent months. For the 1,500 new hires needed to produce the Taycan, Porsche said Monday that it has recruited nearly 1,000 so far after receiving some 32,000 applications. The training process for the electric-car assembly lasts as long as six months.

FORD BUYS DEFENSE CONTRACTOR TO GET ROBOT RIDES ON THE ROAD

As Ford Motor Co. bears down on a self-imposed deadline to field robotaxis and driverless delivery vehicles in two years, the automaker has acquired a small defense contractor whose experience could help get auto-piloted cars on the road. This month, Ford paid an undisclosed sum to acquire Quantum Signal AI, a 40-member team of roboticists operating out of a decommissioned 1930s-era high school in Saline, Michigan, just up the road from the University of Michigan. The 20 year-old firm has experience working with the U.S. military on sniper simulations and remote-controlled sentinel robots.

Anyone concerned Chevy has made a mistake by turning the Corvette into a mid-engine car with the arrival of the C8 generation shouldn't be, at least as far as sales are concerned.

Chevy presented the new 2020 Corvette to the public for the first time on Saturday at the 2019 Concours d’Elegance of America in Plymouth, Michigan, where a number of the car's designers, including General Motors design chief Michael Simcoe, were on hand. Simcoe revealed to Autoblog at the event that the new Corvette's first year of production was close to sold out, without mentioning any numbers. “I think the orders have already hit the first year of production numbers,” he said. “It’s nearly sold out. It’s so close that it’s bound to be sold out soon.”

Chevy started accepting orders for the new Corvette following the car's July 18 reveal so the pace of sales has been nothing short of dramatic, though it's easy to see why. The car offers performance and technology surpassing many exotic models for a starting price of under $60,000.

Chevrolet spokesman Kevin Kelly told Motor Authority, “The level of enthusiasm around the 2020 Chevrolet Corvette Stingray has surpassed all expectations. We have nothing to report in terms of reservations or order numbers at this time.” Chevy's last Corvette hit sales of just under 35,000 in the United States in its first year on the market. Given Chevy's global ambitions with the new Corvette, sales could be substantially higher. In preparation for the car's arrival, Chevy expanded the Corvette plant in Bowling Green, Kentucky, and added a second shift.

$15M fuel-cell trucking project in Alberta
Transmission and axle supplier Dana Inc. will provide an electrified drivetrain system to power tractor-trailer units that will move freight year-round between Edmonton and Calgary as part of a three-year $15-million project.

The Alberta Zero-Emissions Truck Electrification Collaboration (AZETEC) project involves the design and manufacturing of heavy-duty, extended-range, hydrogen fuel cell electric hybrid trucks. AZETEC will test hydrogen as a zero-emissions alternative fuel to diesel for freight transportation, along with the refuelling infrastructure and other systems that would be required for Alberta to implement this new fuel solution. Dana says in a statement its electrified Spicer e-System is “optimized for the Canadian market” and has the capacity to haul 140,000 pounds (63,500 kilograms).

The B-train tractor-trailers — with two trailers linked together — to be used in the project will have a gross weight of 64-tonnes and the capability to travel up to 700 kilometres between refuelling.

Emissions Reduction Alberta, which gets its funding from the province’s Climate Change and Emissions Management Fund, is committing more than $7.3 million to the AZETEC project.